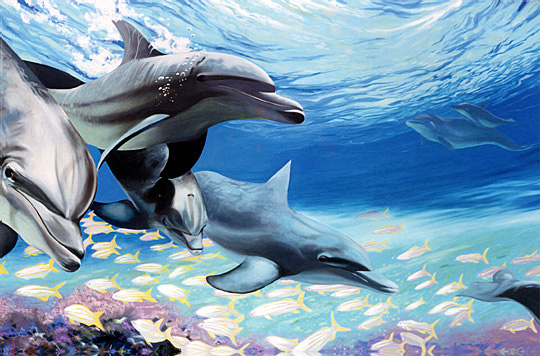 This feature was put together to raise awareness of the slaughter of dolphins in Japan. There has been a lot of hype about this in the media lately, which is great! The more people that know about this, and the louder our voice becomes in standing up against these atrocities the better!

The slaughter of dolphins in Japan

In Japan, for six months of every year, thousands of dolphins are hunted and chased into a cove known as the "floating graveyard" near the village of Taiji. Once entrapped in this cove, the dolphins are brutally slaughtered. The water runs red with their blood and their screams fill the air and the surrounding ocean. As horrible as this sounds, you cannot begin to imagine the true horror of it, until you see and hear it for yourself… If you scroll down this page I have included a video by Hardy Jones that captures these horrific acts of cruelty… [click here]

Dolphin meat is proven to be highly contaminated with toxic chemicals such as mercury, methyl mercury and PCB's… Yet the slaughtered dolphins are processed into meat and distributed to supermarkets throughout Japan for human consumption (including school children!). This is something many people in Japan are not aware of, and all the more reason to raise awareness of all this! The levels of toxins found in some dolphin's could even be labelled 'hazardous waste' under US government regulations!

How do they get away with it?!

Shockingly, the Japanese government permit this slaughter to go ahead, defending it as "pest control". As in, the less dolphins there are, the more fish there are for Japanese fishermen!

Media attention threatens what they are doing

Although it is legal, the fishermen are now very secretive about what they do, because of the increasing media attention… Knowing that their days could be numbered if the world continues to witness these atrocities and revolts against what they are doing. Which is why it is so important to educate not just the Japanese people, but people all over the world as to what they are doing, in the hope that steps are taken to outlaw it! The fishermen claim that they kill the dolphins "quickly and humanely", but you only have to watch the video below to see that this is a lie!

Target the dolphin hunters, not the Japanese people

The fishermen's attitude is "the Japanese people have no right to know what's going on, it's none of their business"… they are wrong! The Japanese people have every right to know the truth! The more awareness and support we can rally the better, whether it be through the wealth of videos out there on YouTube, the many organisations (some listed below), or the various petitions that are presented to the IWC (International Whaling Commission), like the recent Visual Petition in Chile or the Origami Whales Project to name a couple.

Some powerful videos on the subject…

We must warn you that the content of the following two videos is very upsetting & alarming, and there are scenes that some may find disturbing! But all the same, we feel it's important to show the world what is happening!

The video below is a very powerful piece from Hardy Jones' BlueVoice's efforts to stop dolphin slaughter in Japan, narrated by Matt Damon.

The video below is about a group of surfers, celebrities and musicians that paddle out at the "floating graveyard" near the village of Taiji, in Japan (a bay where thousands of dolphins are slaughtered). Among them were Dave Rastovich of Surfers For Cetaceans and actresses Hayden Panitierre and Isabel Lucas.

For more information on the atrocities involved with the slaughter of dolphins and whales and some great supportive causes, please find below a list of web links we hope you will find interesting…

The only way to stop the dolphin slaughter is to keep showing up in these remote villages and going on patrol. We will continue monitoring, advocating, filming, and bringing international media attention to the dolphin slaughter and the related captures. One of the main reasons that the killing continues is that very few people - in Japan and around the world - even know it is happening. Worldwide exposure of the slaughter is the key to stopping it.

The Visual Petition is a powerful statement to the world declaring that surfers, as a global culture, will no longer stand by and let our ocean kin be murdered.

BlueVoice.org draws on the hundreds of hours of film produced by Hardy Jones/Julia Whitty Productions. BlueVoice goes to the scene of urgent ocean environmental issues and works to save dolphins and whales by presenting streaming video, audio, text, images and animated content.

BlueVoice.org presents amazing video documenting efforts to save dolphins, whales and the oceans from hunting, captivity and contamination and explores interspecies communication with dolphins.

The Oceanic Preservation Society (OPS) is a non-profit organization founded in 2005 by photographers, filmmakers and preservationists. OPS provides an exclusive lens for the public and media to observe the beauty as well as the destruction of the oceans while motivating change.

Calls on surfers everywhere to support the conservation and protection of whales and dolphins and other marine wildlife, to protest whaling and the killing of threatened and endangered species, and to end the pollution of our marine environment.

Back to top
Menu