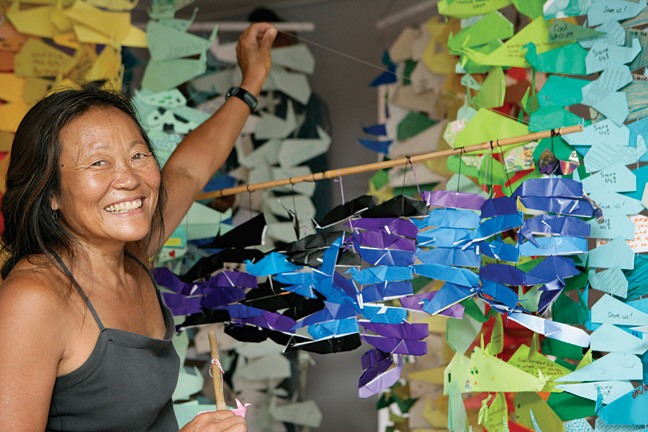 The Origami Whales Project is an international campaign, aimed at getting the message across to the International Whaling Commission (IWC), to put a stop to the slaughter of whales and the cruelty of commercial whaling in Japan, Norway and Iceland.

The project was masterminded in 2004 by Peggy Oki. Peggy is one of the featured artists here on COTW, you may also remember her as the only female member of the legendary Zephyr Skate Team (a.k.a. Z-Boys of Dogtown).

The offending nations defend their whaling, claiming that it is "scientific research". Japan claims that the purpose for their "scientific research" is to calculate how much fish the whales eat. They claim that they need to gauge the impact of these whales competing against their own fishing fleets. However, a recent paper published by the US Department of Commerce concluded that "hunting whales is unlikely to provide increased catch of fish species because of the complexity of ecosystem interactions".

Despite strong disapproval expressed by the IWC, as well as by the governments of New Zealand, Australia, Great Britain and the USA, Japan still sends it's whaling ships out for the hunt. Norway, in their blatant defiance of the IWC, has continued to kill hundreds of Minke Whales each year.

Origami Whales are created and donated from thousands of children & adults of all ages, schools, organizations and individuals from all nations. The origami whales are collected as a curtain, acting as a memorial for the lives of whales lost to commercial whaling. The sheer size of this curtain is intended to raise awareness to the alarming numbers of whales being killed each year and to shock the authorities into doing something about it.

The idea for the project derived from a touching Japanese story…

Sadako Sasaki, a young Japanese girl, on the threshold of adolescence, developed leukaemia in 1955, from the effects of radiation caused by the bombing of Hiroshima. While hospitalised, her closest friend reminded her of the Japanese legend that if she folded a thousand paper cranes, the gods might grant her wish to be well again. With hope and determination, Sadako began folding.

The project first started in 2004, as the "1,400 Origami Whales". The 1,400 represented the number of whales that would be killed in 2004. This was the sum of the quotas set by Iceland, Japan, and Norway. The project expanded in 2006 to become the "Curtain of 2,285 Origami Whales", the raised number signifying the increase in whaling quotas.

In 2007, through global public participation, a "Curtain of 30,000 Origami Whales" was created, which (in 2007) reflected the most recent estimate of whales slaughtered since 1986. It was created to raise awareness and call for action, through inviting public participation in making this curtain as a memorial for the lives of whales lost since the moratorium on whaling in 1986.

The curtain was first exhibited during the 59th annual IWC meetings in late May 2007 during the International Whaling Commission Meetings at the Alaska Centre for the Performing Arts (PAC). With a height of 5 feet, and a linear dimension of over 200 feet in length, the curtain was hung as a simple maze of aisles of origami whales within an installation 12 feet wide by 50 feet long. On the 30th of May, "Whales Need US" (a coalition of 20 animal welfare organizations), hosted a special reception at the PAC inviting all IWC delegates to attend. Numerous attendees walked through the curtain. The "Curtain of 30,000 Origami Whales" was also exhibited in a 20 by 40 foot space at the Alaska Oceans Festival (Anchorage, AK) in June 2007, where hundreds of visitors walked through to experience this beautiful memorial to whales.

Whalewatch is a coalition of over 140 non-governmental organizations (NGOs) in over 55 countries worldwide, united by a common belief that whaling should be banned because it is inherently cruel. There is a very good, educational, shocking and eye opening video on whaling on the home page.

The World Society for the Protection of Animals' whale campaign supports the international moratorium on commercial whaling by discussing the welfare implications of whaling activities, thereby helping to preserve this global agreement on whale protection.

The Whale and Dolphin Conservation Society campaign to stop commercial whaling at every level - in international meetings; in the press; through public protests and by encouraging governments to take stronger actions against whaling nations.

The International Fund for Animal Welfare strives to ensure the welfare of living whales, keeping individual animals safe from harm, while protecting whale species and their habitats worldwide.

"Whales can't survive without US leadership".

An article on commercial whaling written by Peggy Oki.

My thanks to everyone for their support and participation in the Origami Whales Project!