For 25 years I have vacationed in the summer, as well as being a full-time resident, to the shores of Waikiki. However, this year's events were entirely unexpected. I have created a series of 28 watercolor paintings depicting my adventures this summer, along with descriptions of each piece of artwork. I went from the joy of peeling turquoise waves blowing their beautiful white spray skywards, to a life-threatening illness of which I almost succumbed. I am proof that you can come back. I hope you find the record of this journey interesting.

Words and paintings by surf artist Ron Croci. Click on the images to enlarge…

This beautiful gem of a pool is right in front of the Hilton Hawaiian Village. It is a gateway to the world's most beautiful water sports paradise. 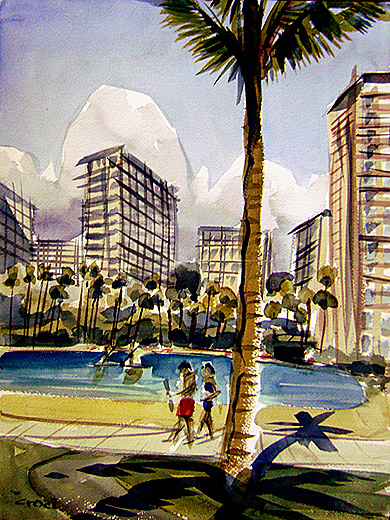 This has been the site of thousands of beach boys' barbecues. 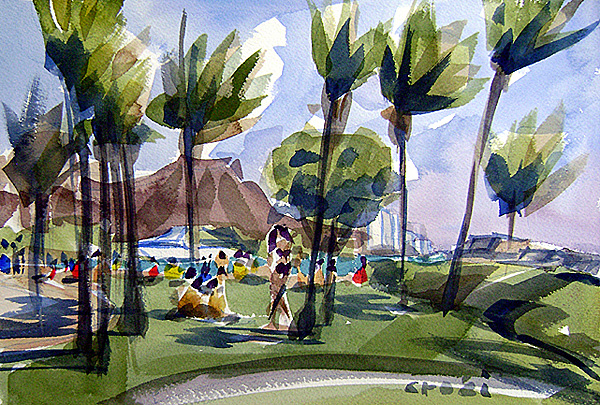 This place I compare to John Steinbeck's Cannery Row. It is a surfer's surf spot. All the main characters have been here for decades. 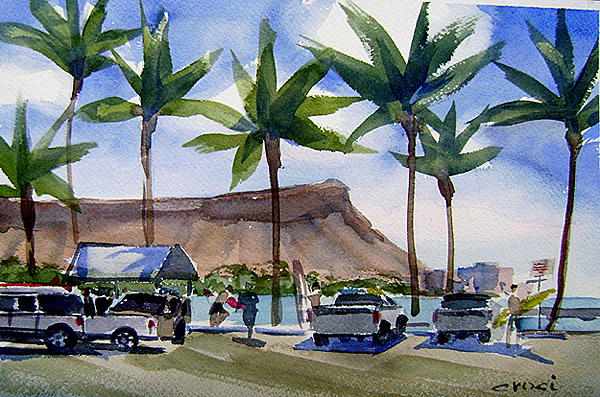 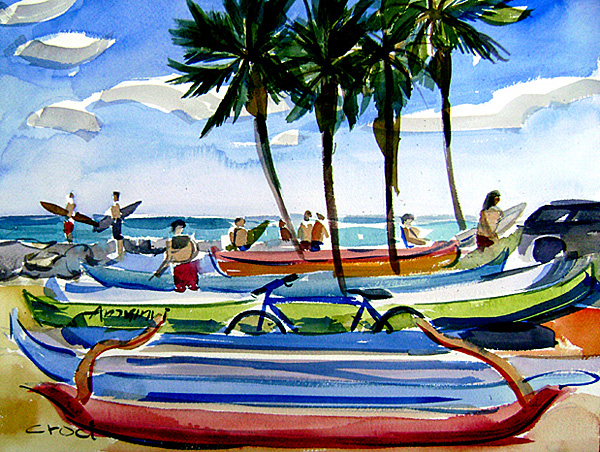 This view of Diamond Head is with Nappy's canoes to the viewer's back. 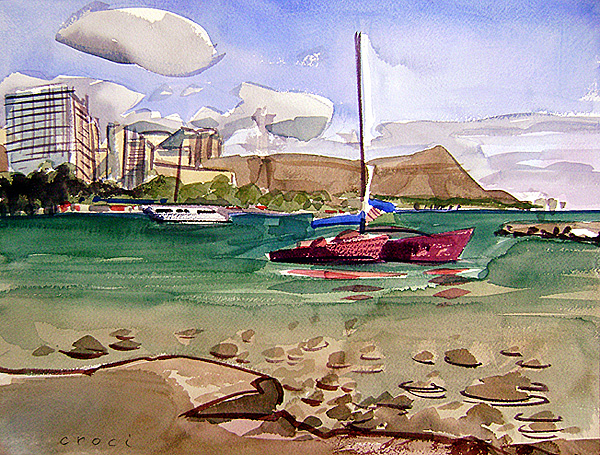 This is a view from the Kaiser's jetty, looking back at the canoes and the Ilikai Hotel. I am always filled with anticipation because of the surf to come. 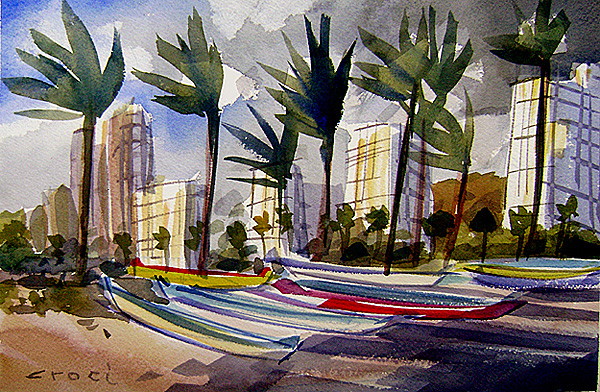 I have surfed this break thousands of times, and still I love being there no matter the crowd or the surf. The Kaiser's Bowl till death do us part. 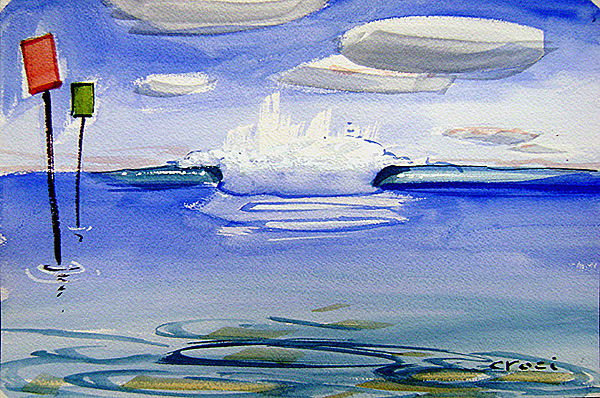 This small glassy hollow tube over razor sharp reef, with a view of Diamond Head through the barrel, is a thrill ride through water. The channel markers are at the end of each ride. 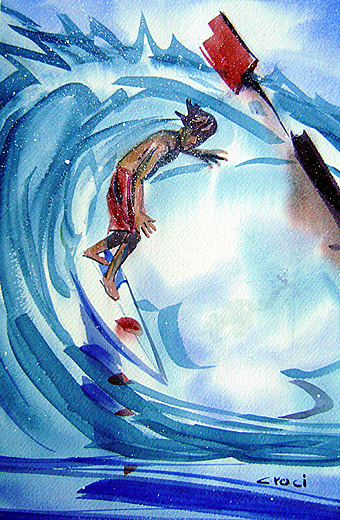 Not as hollow as the right but longer. Just scratching over the sets and watching the guys taking off in a shower of offshore spray is one of action sports closest relationships of viewer to participant. 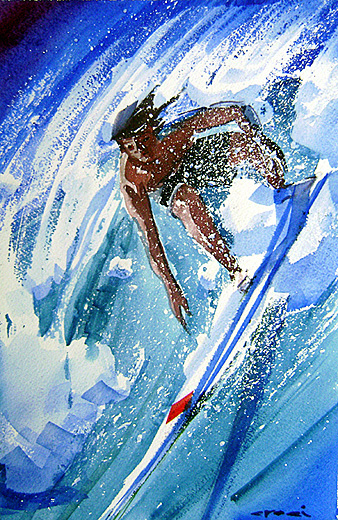 After a long surf session there are always lots of things to do like visiting the Korean Temple in Palolo Valley. I was sitting making this watercolor when a Kung Fu practicing Monk came up to me and said I should ask myself the question, "Who am I?" 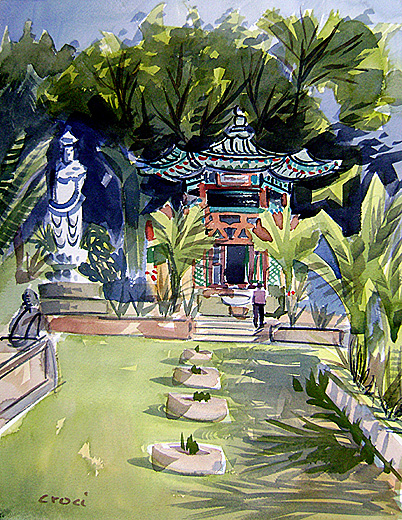 Ala Moana from the Ala Wai Harbor

This is the lunch table from the Poor Boy's Yacht Club. The peeling left of Bowls is in the distance. 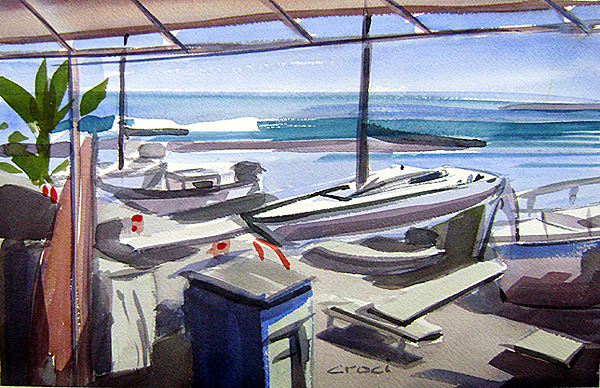 Not as gunshot as Kaisers, not as long barrels as Bowls, but a wonderful left that thousands of eager surfers feast on. 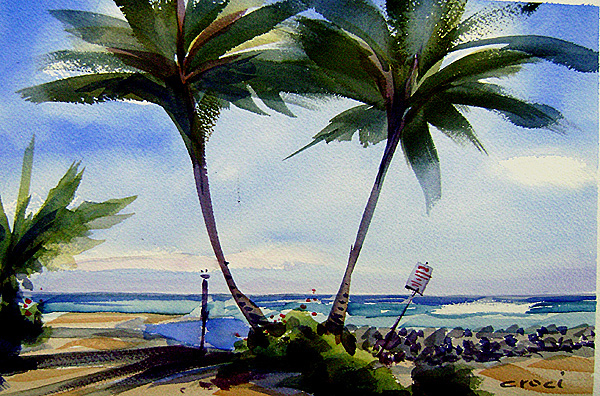 Windy and turquoise, this is a haven for Hawaiian families. 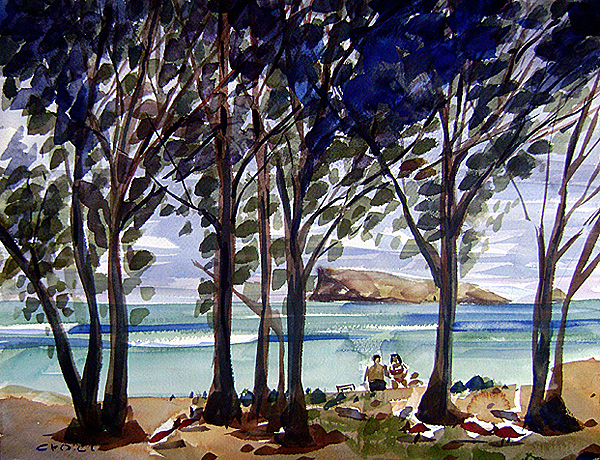 Seen here on a balmy summer day, it is hard to imagine the heroic waves that pass through here during the winter season. 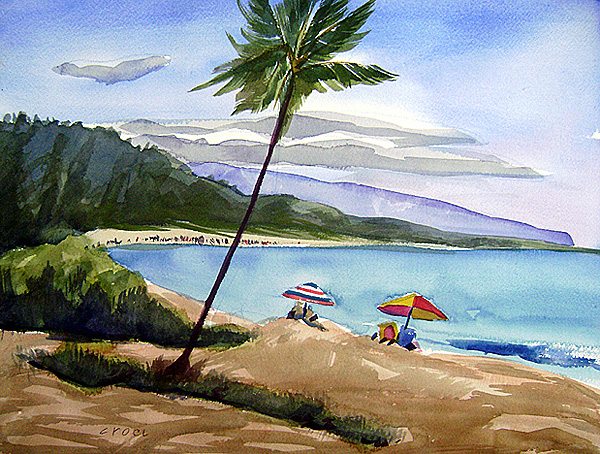 One of Oahu's many beach parks, with KoKo Head in the distance. 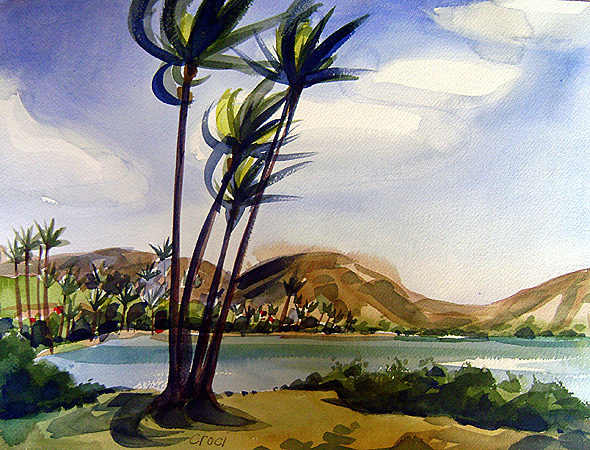 After 9 days of surfing Waikiki I am starting to feel weak but need to go to the big island on business. I can only describe this view of Moana Loa as majestic. 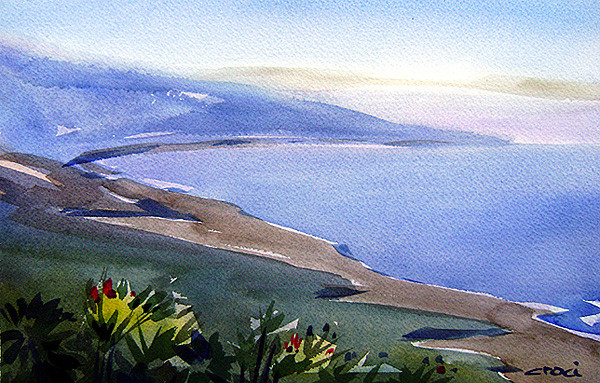 This is where Captain Cook made his European discovery of Hawaii and his eventual death. I am feeling very weak, I think I need to see a doctor. 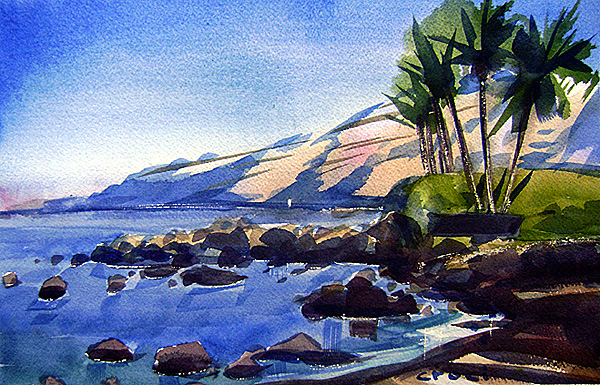 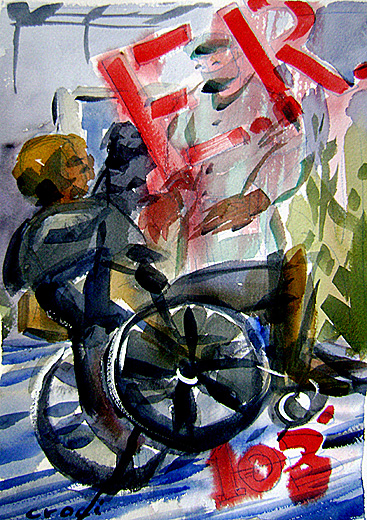 After realizing that I have a huge liver infection, I am realizing that this is life and death and surgery must be immediate. My kind wife and the frantic hospital personnel surround me, I am going out now and am thinking that I am alright with dying. 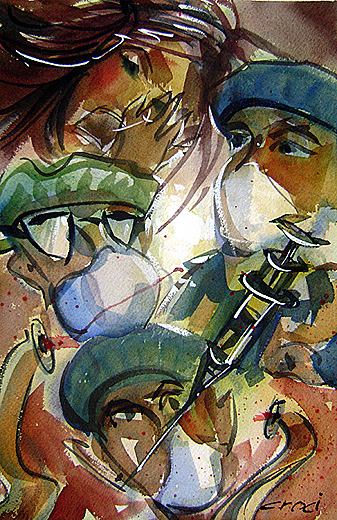 I look inside and this is what I see. 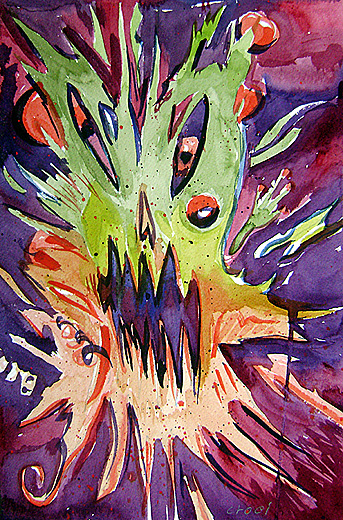 When I see it, it looks back at me. 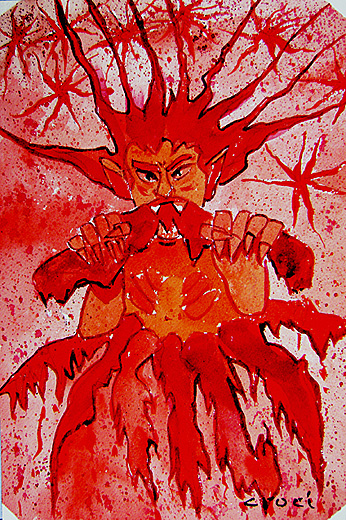 I survive the surgery and this is my room. 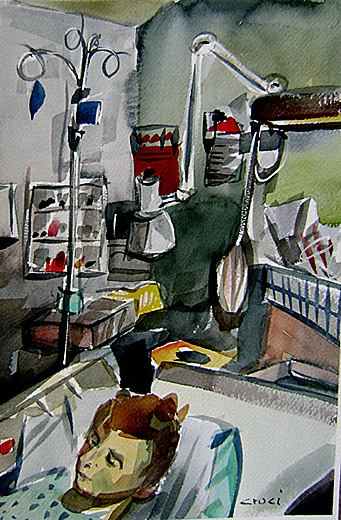 View from the hospital bed

Even though I was so ill I didn't care to see anything, the view outside my window was a tropical paradise. 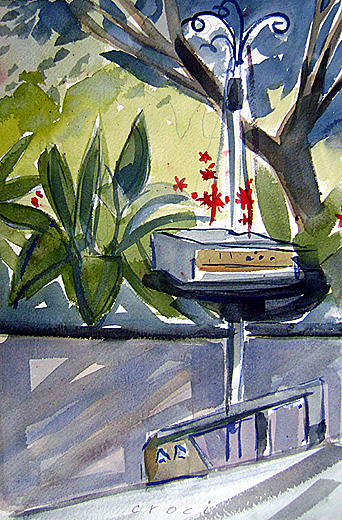 While recovering I had many morphine-induced nightmares. I dreamt I was on the island of Samoa while cryptic people were standing around a distant fruit stand. There were strange old cars filled with mangoes. 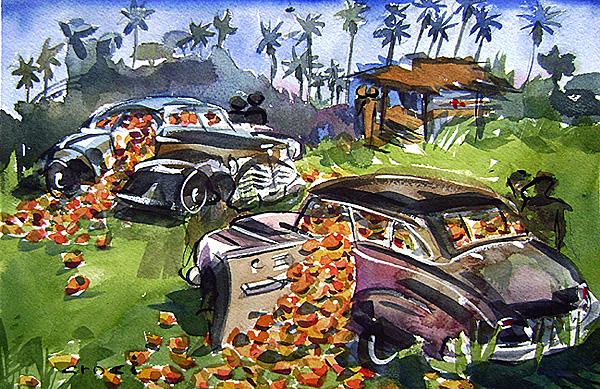 We belong to each other

I dreamt very vividly that I was hugging my father and could feel his whiskery cheek, while I spoke the title of this painting, about my long-ago passed away mother. 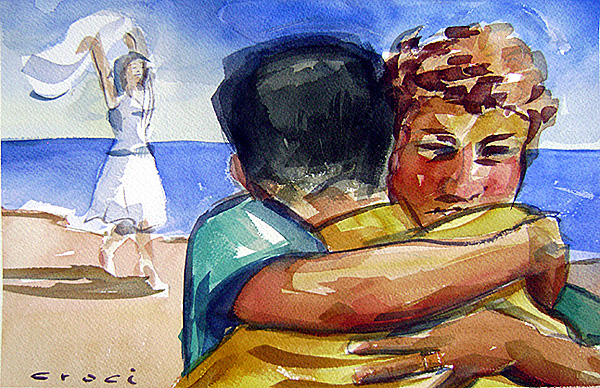 I had an outstandingly realistic nightmare that I was flying over a Chinese New Year. It was very chaotic; while Chinese men were kissing my ear and making little pebbles come out of it. The nights were terrifying so, at this point, I stopped taking morphine. 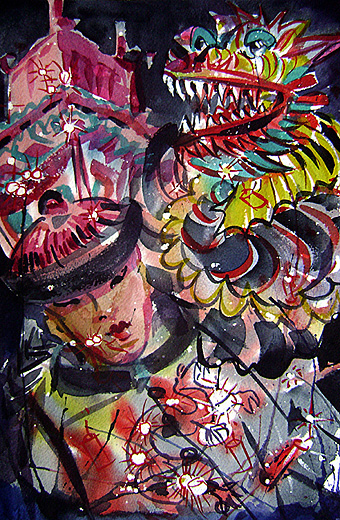 After two and a half weeks in an intensive care unit, I was strong enough to have all the drainage tubes removed, and took the midnight flight home. Of all the dozens of plane flights I have been on, the only time I ever had a worst flight is the time when I drank too much alcohol while partying in Singapore, after working on John Milius' classic, Farewell to the King, on the island of Borneo. 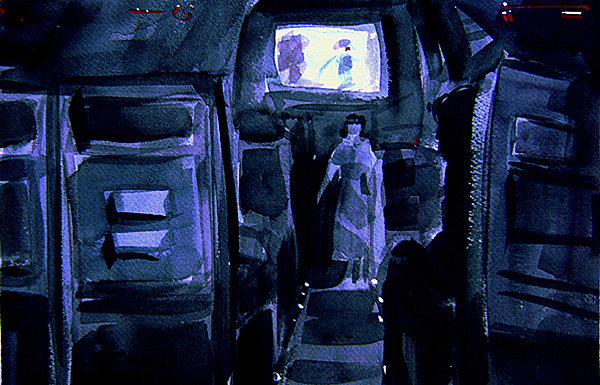 After these life-changing ordeals, I was deliriously glad to be back home. Still, it took me four more weeks to recover. 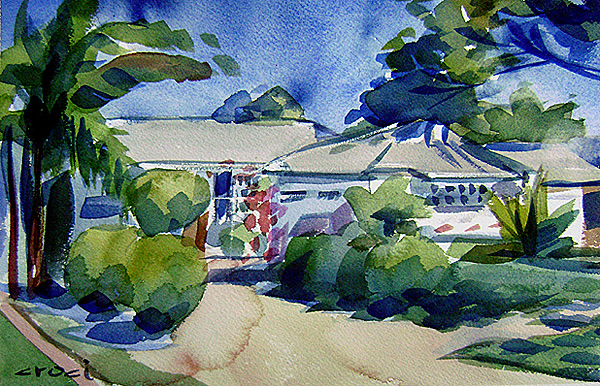 I would like to dedicate this online exhibit of artwork to my good friend, Bill Smith, who passed away in November, 2010. Bill was a surf instructor and gave the gift of surfing to thousands of people. We surfed, laughed and hung out together for 25 years on the beautiful shores of Waikiki.

All the artwork in this series is for sale. Each picture is on average 12x8 inches. The wholesale price is $125 each, either individually or as a group. To purchase please contact [email protected]