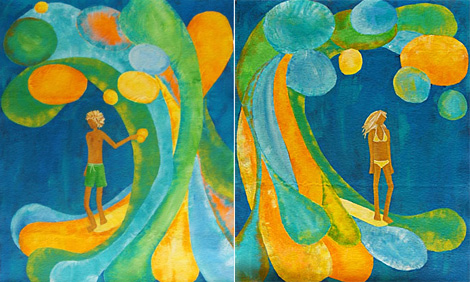 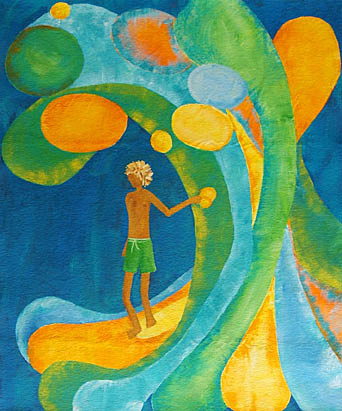 I went to Costa Rica to surf, paint and live for three months. My experience became a living dream translated onto unstretched canvas.

The first paintings I made in Costa Rica were new versions of old ideas, paintings I lost along the way and needed to recapture. How I was feeling, out of place and instantly at home, influenced the direction of the paintings. It was like being home in San Diego because we would wake up early, squish ourselves and our boards into cars and head out looking for surf. Except instead of communicating in English, everyone was speaking Italian. Italian in Costa Rica? I was living with Italians I had met while traveling the previous year. Even though I can speak Italian, I was not comfortable in it and shy.

So the backgrounds of the paintings began with deep and foreboding colors. After the background was in place I started on the waves. Costa Rica took over. My colors turned tropical: golden mangos, orange papayas, yellow pineapples, clear blue skies and green palm fronds. The mood indigo background and the brilliantly inviting waves were incongruous. So I changed the background into a blue to tranquilly float in. The girl and boy hang five with nonchalance, riding in the present, not held back by the past or caught up in the future: an Italian way to be. The waves they ride form a heart. My love of surfing was renewed by stepping outside myself and experiencing the genuine passion for surfing my Italian friends possess. The paintings, Tropical Love, led me from who I was to becoming more of who I am. Their creation set the tone for the subsequent paintings I created during my stay in Costa Rica.

Originally I thought I would create paintings based upon resources I had brought with me from home; however, immersed in the pura vida lifestyle I found my ideas instead in the moments I witnessed and shared with my friends.

One day, after finishing a surf session with a long beautiful left, walking into shore I saw my friends Micol and Pier in the water. Pier had just finished his session as well and was teaching his girlfriend, Micol, how to surf. The smile dancing on his face and sparkling in his eyes eclipsed the one he wore whenever he would ride a wave on his own. The two of them in the water together: Micol learning, loving and experiencing surfing and Pier sharing his passion with her, being patient and proud. Seeing them together I decided that they would be perfect subjects for a painting I was already working on. The couple bicycling to the beach became Micol and Pier. They are pedaling to the beach, in no rush, savoring the promise of a wonderful session. Their love for each other and for surfing permeates the painting.

At the Manzanillo sand castle contest another idea for a painting presented itself. I came to the contest with my friend, Jes, and her family. We bounced our way to Manzanillo in their Range Rover driving the last part of the trek across the beach to where the festivities were. We threw down a blanket and shared some Pilsens. Then David and his friends went to look at the various entries. While Jes and her daughter, Osa, ran down to the water to cool off and build their own sand castle, I sat in the shade and pulled out my sketch book. With my pencil poised to sketch I paused to take in the beautiful beach and all the people gathered for the festival. Then my eyes wandered down towards the water. At the water's edge I saw Jes and Osa being airplanes. I did a quick sketch of them, the idea became a painting. My painting of Jes and Osa is a favorite of mine because it represents a moment shared and it is how I remember my friend and her daughter. Expressing wonder, letting go, being together in a spontaneous moment flying on a beach. In the painting the sand is undulating and the trees are dancing. Jes and Osa are flying. The two waves coming ashore embody their spirits.

Another day walking to go surf I saw Raven and her mother on their way to the beach. Raven was sitting on her mother's shoulders and her mother had her surfboard under her arm. I did not have my sketch book with me so throughout my surf session I held onto the idea. When I finally began the painting of Raven and her mother I made some changes to the original idea. Instead of walking through town to the beach I depicted them walking on the beach. Also Raven became a boy and their hair color is blond instead of brown. Even though I start with an idea it is a dynamic one, evolving as I go. The changes that happened during the creating process made me think of my friend, Esther and her son Vinni who spent the last winter season in Costa Rica and that I have lost touch with, as well as Jacquie and her son Kale who had just left to return home to Canada and that I missed. Creating this painting also let me dream of a possible future for myself. These thoughts, revolving in my head while I was creating, contributed to the painting.

Thank you for looking and reading. It is a joy to share what I create. Take care, Meegan. 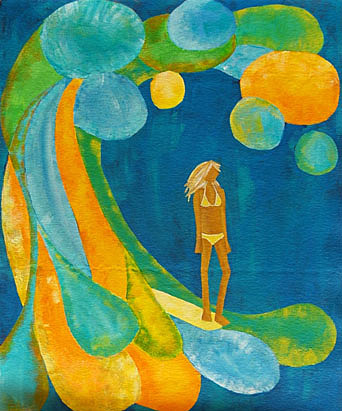 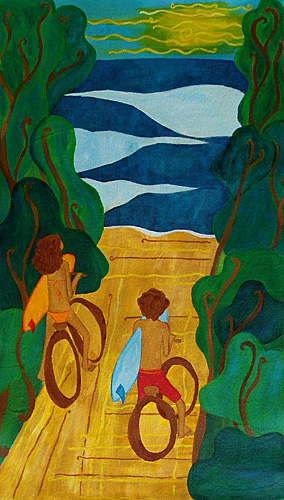 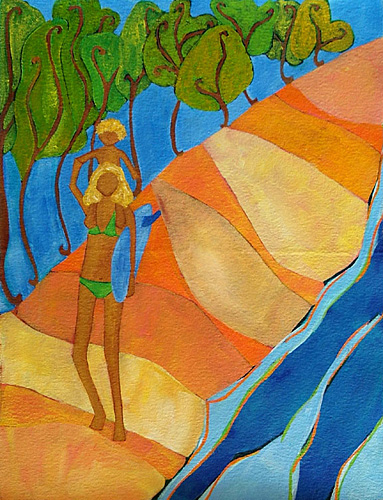 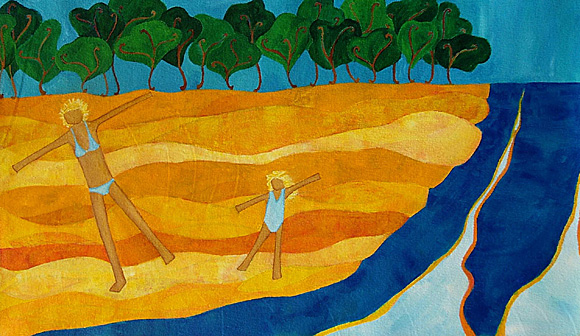