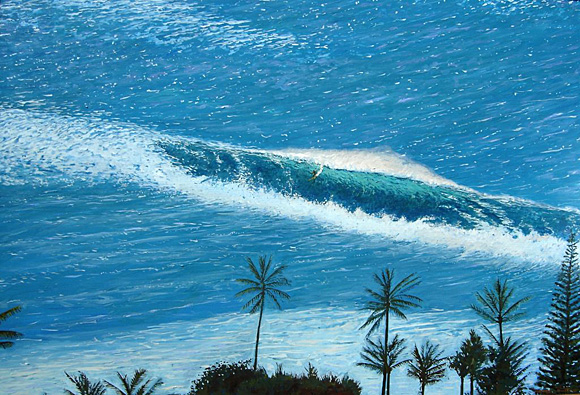 Nulla Dies Sine Linea ("No day without a line"). French surf artist Bruno Turpin shares with us his passion for surfing and surf art.

Big swell coming from Florence Cyclone was beating all European Coast. The Cotentin Island in Normandy, France received this long period swell with massive white water. The small cove down under was empty, tide was a little too high but beautiful line entered in this natural arena. The roar from perfect rolling line breaking scarred us. Despites the attenuation of the height of waves due to the cap, I wonder me if I would go with my 9'3. Decision was taken, I couldn't resist any more to the call of the waves…

Later in Paris in my studio, feeling the emotions back, I took my brushes and start strokes on the canvas. I feel exactly in the same mindset as I was paddle with energy towards the line up and taking waves…

Being a surf artist is not a choice, you are. You have that feeling inside since the beginning: it's innate. One day, you surf and it reveals to you what you were made for, what you are in phase with. This first wave makes you discover the truth.

For me, there were two steps in this opening. The first one came after a long stay in California in the 80's. I was deeply impacted by this soul surfing period, discovering that I was in phase with this mindset. The second one came later, the seed took time to grow, but one day I bought with first revenues a surfboard, put it inside my small car and drove to the beach. Cotentin in 90's was roughly deserted for surfing, surf was growing up and pioneer spirit was there in this area of France.

Face to the Ocean in January in small wave, alone I took my first wave, immediate sensation and making me so enthusiastic, despite my poor level and the quality of the waves.

In parallel I used to paint, more precise I never stop to paint since my childhood (Picasso said that "'all childs are artists"). With surf revelation, all became clear, I used to paint what I love. Things were simple. Surfing and painting was my first signature for my studio, linking both, it’s still the way today with same passion.

The story could end there, words are sufficient to describe the story of a surf artist. But Club Of The Waves asked me more about my feelings about being a Surf Artist (France, exhibitions, scene…).

First of all, I paint for myself, when a painting is finished it's the time for sharing it with others, sharing the passion. In this sharing attitude there is many 'down', but sometime 'up'. And when it's 'up' you feel like at 'the top of the wave': Breathing deeply the emotions from others.

I feel deeply this emotion in Glissexpo Event in Paris in 2001 (replacef now by ASR Europe). I was invited as a special guest for featuring my art works during this Surf Industries event and the organization gave me 50m2 to exhibit my art work. It was the really first big show happening for me, and I was stoked like a child during 3 days. People from Surf Planet and others horizon came in the entrance where I was featured and I had plenty of good vibes. I was like a flying bird during couple of weeks after and still have a nice and happy memory.

I succeed after many years in defending my belief and my commitments to Surf Art. At the end I was exhibited with famous painter the 'POMs' (marine official painter corp.) in Famous Classical Art Gallery. It's something revolutionary: classical art gallery fully recognized, having for resident a Surf Art painter. The many 'down's' became a single 'up', but what an 'up'!

The fact is that surf art makes you encounter people and share emotions with other despites appearances. Surf Artists shows through its paintings his soul and people communicates directly with the same spirit values. Art has this power, Surf is its message for Surf Art Painter.

In 2001 in The Surfer's Journal, French edition, the Editor said that we were pioneer in France… I would say that every Surf Artist in world is a pioneer. When you see how many Surf Art painters offers us their unique universe with intensity and so high emotions. I am very proud to be in that community. I respect those who have dedicated their full artistic talent to surf spirit. It's a commitment and a long path, but what a fantastic trip!

Today the trip continues, I enjoy myself of the full freedom that I have in the surf art way. A window is ever open in your mind. That's surf art life style, forever young and open minded.

Surfing is the art to ride beautiful swell line. Citation is for us.

Nulla Dies Sine Linea, for all. 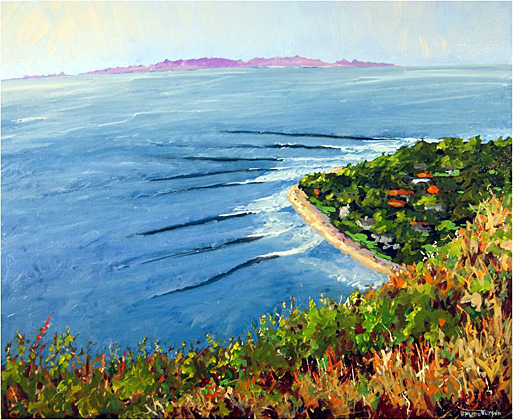 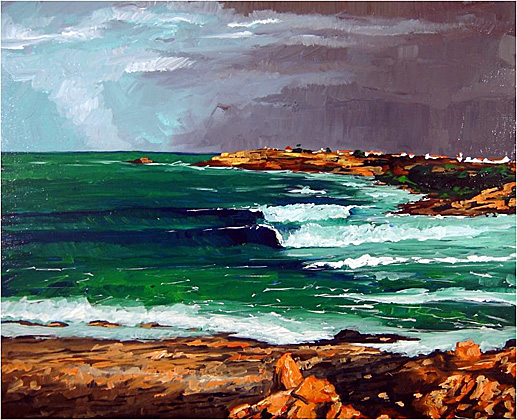 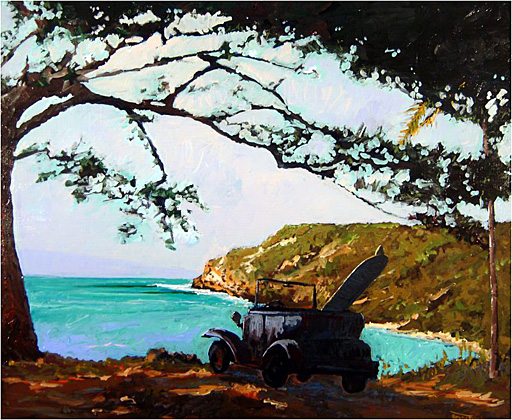 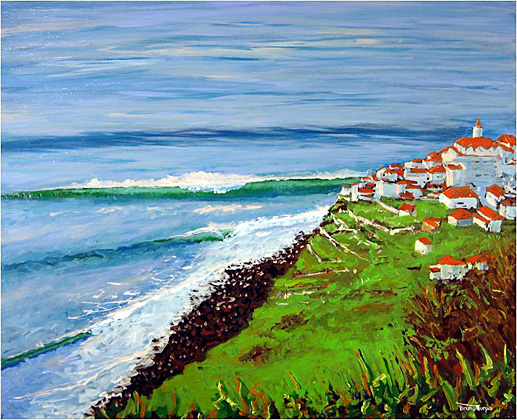 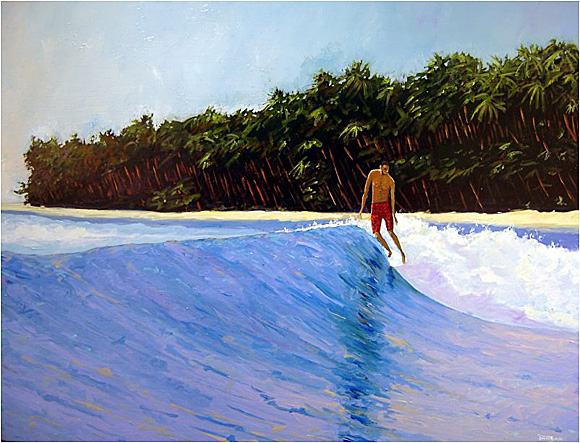 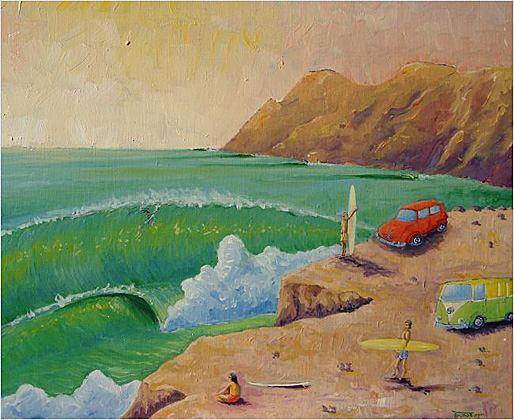