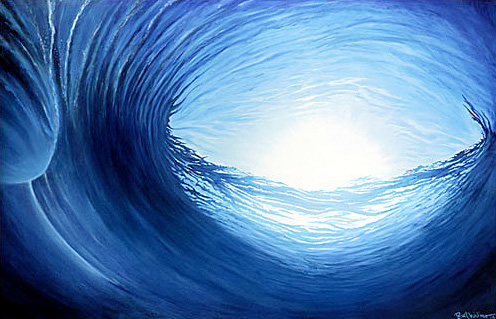 Australian artist Bret Walker hails from a diverse sporting background. He is a world traveller, and has competed at a professional level in surfing and snowboarding. Other sports such as motocross and skating also played a major role in his life. A spine injury resulting in surgery changed his career path to another passion of his being art. Bret is now surfing better than ever, with a fine art career and a sweet graphic designer gig in the surf industry.

Bret, thanks for doing this interview, and thanks also for featuring on COTW…

BW: Thanks for having me, its nice to be in the club.

BW: I grew up around the coastal areas of the mid north coast and south coast of New South Wales. After travelling I now live at Stanwell Park beach on the edge of the Royal National Park NSW.

What were your first experiences of surfing and the ocean?

BW: My earliest memory of standing on a surfboard was when I was really young and paddling one of my fathers long pintail single fins inside a beach river-mouth and standing up on its momentum. My dad is a surfer so my parents started taking me to the ocean when I was baby. I still regularly surf with my dad and borrow the odd singlefin or logger.

Talk to us about your time competing in surfing and snowboarding…

BW: First thing that comes to mind is all the travelling and excess baggage, I got to visit some great places and have a lot of good friends from doing the contest thing. The cross over events were much more fun when the snow events were slopestyle in a park, I had a lot if injuries from racing boardercross. I was into handrails so the park events were what I was into. For me competing in surfing took the fun out of it and made it stressful so I don't miss it. I did like doing the Quiksilver Airshow events, all you have to think about is going down the line as fast as you can and boosting. I like the singlefin contests that are happening now, they are pretty fun.

Didn't you just shape your first board? A singlefin?

BW: The Warlock! I rode an old 60s singlefin in this short film a friend made 'the warlock from age' its the full s-deck egg tripped out shape. The thing was so beat and I was keen to try shaping so I shaped a new version of that board and painted it and glassed it. It came out really good and it works well too. You can see the short film at www.myspace.com/thewarlockfromage

Im very sorry to hear about your spine injury, but equally impressed that you've gone onto accomplishing so much in its wake. How has this experience changed your approach to your life, your career, and your art…?

BW: A very heavy thing to go through and the rehab was sooo long, it taught me not to take things for granted that's for sure, I had nearly a year where I was just allowed to go walking and I would just walk laps of the beach here and see good waves breaking wondering if I would be able to surf them again. My back still gives me grief and now and then, the pain comes and goes, some day's I can't surf because of the pain and relapse of muscle spasm but other day's its ok. I have to do deep tissue trigger point therapy and remedial massage plus stretching and boring kickboard laps in the pool and just choose surf conditions carefully and don't surf when it's really heavy. But I'm pretty lucky. The surgeon said I wouldn't surf again. That's what got me more into riding fishes nowadays and messing around with singlefins and stuff. I've pretty much given away snowboarding, skating and motocross, I still ride a moto but no racing or jumping anymore. So I had a lot of time to spend doing art after the surgery and that's how it all got started.

I understand that you are still a sponsored surfer, competing in the odd competition, and have recently signed a deal with Gravis, who else is supporting you?

BW: Yeah recently got a deal off Gravis, thanks to Alikat for hooking that up. I'm riding for Warner Surfboards, RVCA Clothing, Sabre Vision, West Wetsuits and Astrodeck. I love the fact that these are such art driven companies and I can have an involvement in that also. It's great that I don't have the pressure to compete and I get exposure from my art so its pretty cruisy.

…You've also got a bunch of surf magazine editorial features coming up about your art and surfing?

BW: Yeah I'm doing editorial features at the moment and some film projects also, I'm working with a few different photographers for land and water shots and I'm going to be doing some board mounted camera photos which I'm looking forward to. One of the features being PLB Magazine it's a 4 page spread which they are going to let me do the whole graphic design layout and have full creative control which I love.

By your own admission you like to experiment with different art mediums and techniques, would you like to talk to us a bit about your art…

BW: To me that's what art is about, experimenting, that's how you learn and find new textures and create new styles. I like to have different styles for different mediums and not be known for just one thing, its good to have the realistic pieces then start messing with something else. I'm very much into the fingertip blending with most mediums I use too. Something I want to start experimenting with is a thick resin finish on panels.

Are there any other artists or individuals that inspire your work?

BW: Andrew Kidman inspires me, he is so hands on in the whole creative process and is a great artist in many different artforms including music. I got to spend a bit of time with Andrew and Neal Purchase Jr when they were down my way touring with the movie Glass Love.

So Mick Mackie made you one of his crazy flextail keel fishes?

BW: That board gets a lot of attention and weird looks, I've known Mick for a long time, from around the Cronulla area and I had been on photoshoots for O&E with him back when I was a grom. In Glass Love I saw Garth riding a Mackie keel and just had to have one, then Mick said he was doing the flextails and just let him make me what ever he wanted and its a fun thing to ride, it takes a different technique to surf those boards but you can work it out pretty quick. Warner is about to relaunch his fathers 1970's company Morning Star Surfboards making the retro keels and singles so I'm going to have a nice quiver going soon.

You wrote the acoustic guitar intro on your website, any other music or band projects on at the moment?

BW: We had a band called Vortices, which ended a while ago now, we recorded a couple of songs one gets a bit of airplay on Fuel TV. I've been jamming a bit lately and learning to play drums a little, nothing serious but maybe we will play some local shows if we find the time to get some stuff down.

You are also involved with many other design disciplines including graphic, web, photography, animation, illustration etc…

BW: I just created the new Warner surfboards website www.warnersurfboards.com and I'm working for RVCA Australia as their graphic artist, Nathan Webster is running RVCA here in Oz which is pretty cool. I like to mix it up and I have a studio where I live with a view of the beach from where my computer is, I get to work my own hours doing all kinds of work and unless its a rare deadline then I'm in the ocean every day. Its good because your not selling fine art all the time so you can have a good income doing design work on the side still giving you the time to do fine art projects and even combing the two.

You're no stranger to having your work exhibited, having in the past exhibited at events like the Rip Curl Pro Bells Beach, hanging out with the likes of Elise Garrigue, plus various other galleries… Tell us about Bells and what does it mean to you to share your art with others both in exhibits and online?

BW: The "Whitewash Surfer's that Art" invitation exhibition was rad, it was the opening party for the Rip Curl Pro with free beer and hundreds of people including a lot of the surf industry and media which was great exposure. The exhibition ran for the whole event. Pretty amazing to meet people there like Elise and hear their thoughts of your work. My friend Sted's ended up making the quarterfinals in the main event, a very fun trip! My Greenroom piece I panted live in an Ocean Gallery in Cronulla as a promo event. It was weird having people watch the whole process and it probably didn't make sense to the viewers until the final days. With the online images screens don't do the artwork justice as monitors differ in colour and you cant see the brushstrokes or texture but it is a good way to sell prints.

More recently you've been working on a study of the underwater perspective of the breaking wave, which sounds very interesting! More exciting still is that this study will be exhibited in Japan…?

BW: I've been set up with some good management in Japan. I'm just working out the logistics of getting my artwork over there and then finish about 6 or more pieces. It will be a surf art show of mainly the underwater wave works. I'm looking into stretching the canvas back onto frames over there. A cool mermaid piece I'm doing is of Rasta's wife Hannah, she has got all those awesome mermaid tail costumes that she swims in. I've never been to Japan and I'm hoping to go surf that indoor wavepool or ride some powder.

So where do those who want to see your artwork and/or purchase your art have to go?

BW: www.bretwalker.com or at the moment Your Art Gallery or 71 Percent Water Gallery here in Oz.

What does the future hold for Bret Walker?

BW: Hopefully to get my work more exposure overseas and I'm looking at setting up a new studio space here and just keep creating.

Thanks again Bret for this insight into your work. 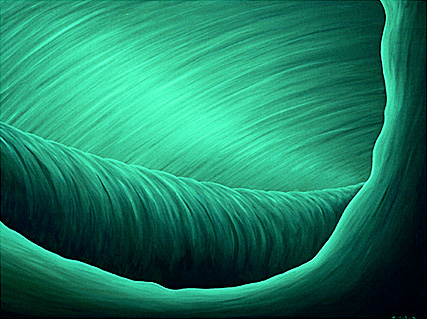 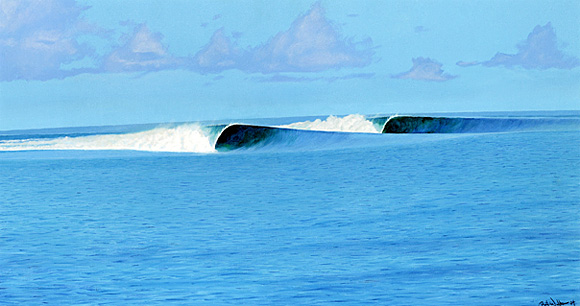 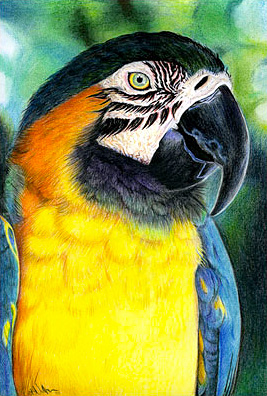 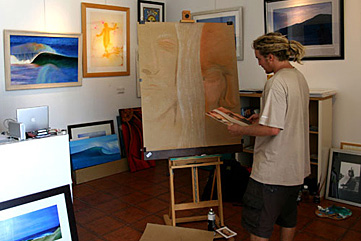 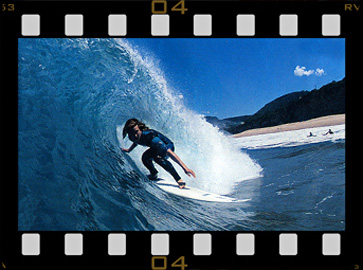 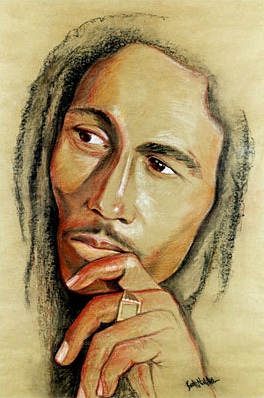